In the past year and five months, I have watched 360 hours of authentic Chinese videos, including a few dozen hours of listening to songs in Mandarin. Thus, I have concluded 30% of my experiment’s 1,200 hours. Each time I complete an additional 10% of the experiment, I test my comprehension. I conducted the same test today as I did at the 20% mark (which I also repeated at 26% completion). My results continue to be encouraging, though quite modest. I currently assess my standard Mandarin comprehension at 15%. 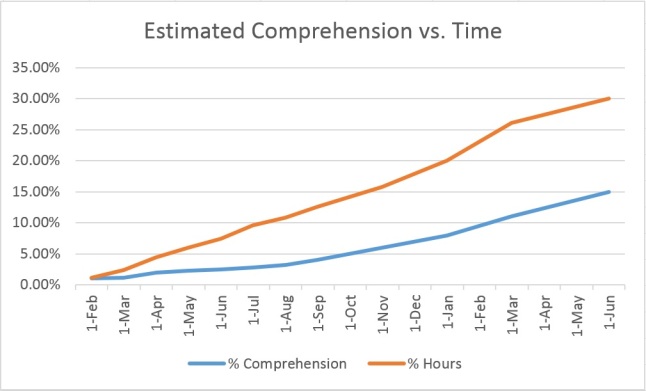 I used the same Singaporean soap opera, Two Cities. I watch this show and this genre exclusively when taking these tests, so that I don’t get used to the specific dialogue or voices. I go months at a time without watching a single minute of any soap opera.

As before, I watched the first 15 minutes of a brand-new episode[1] of Two Cities and jotted down the words I thought I understood. I then went through the 15 minutes a second time to get a more precise count, excluding words I got wrong and adding words that I understood the first time but did not have time to write. This was the exact procedure adopted in my last two tests. I should stress, as usual, that I included all word occurrences. If wo (I) repeated twice in a single sentence containing about 10 words, I scored 20% for that sentence, even if I understood nothing else.

A bit of research online had turned up the ratio of approximately 1.7 characters per word. However, I feel 1.5 is a better number to use for two reasons. First, and most importantly, I think the ratio is likely to be lower in this type of dialogue, since so many word occurrences are simple single-character words like wo (I), ni (you), shi (to be), bu (not), mei (not), and so forth. Put another way, I’m assuming that, like English, oral Mandarin has a higher preponderance of monosyllabic words than written Mandarin, which is likely to include more technical and literary terms. The second reason is simply that I believe 1.5 is closer to what I was estimating in previous tests, making my current result more comparable to previous scores. (If I had used 1.7, my estimated comprehension would be 17% rather than 15%).

I am pleased with my result of 15%, since it continues to suggest accelerating comprehension, as the above graph illustrates. I would refer readers to my more detailed discussion of results and possible projections in my 20%-assessment post. Extrapolating my rate of learning in these first 360 hours to the full 1,200 hours of my experiment—a projection of tenuous value at best—would take me to 50% comprehension by completion of my experiment, which would probably not be quite enough to consider myself at an intermediate level of comprehension, but would be enough to constitute a strong foundation to build on with other language acquisition methods.

I would estimate that about 15 words accounted for 90% of the word occurrences that I understood in this soap opera segment. I knew all of these 15 words in January, when I had completed 240 hours (20% of the experiment). Nonetheless, my estimated comprehension jumped from 8% to 15% in this period.

I do believe my improved score reflects real progress, and was not a fluke or the result of poor test design. Based on that assumption, what this improved score reveals is a better-tuned ear and a greater ability to hear and decipher the simple words that I learned a long time ago, rather than a larger vocabulary. Undoubtedly, my vocabulary has increased in the past few months, but the test results do not reflect that nearly as much as simple auricular training and adaptation.

In fact, a quick glance at my test notes reveals only four words that I may not have known at the 20% mark: jia (home), he (drink), zai (to be [location]), and jiao (to be called, referring to names). Most or all other words are “old vocabulary” from the first year of my experiment, and the majority very simple terms deciphered in the first few months.

Perhaps a more important—if less precise and objective—observation is that I believe my comprehension of the overall meaning of what I watch is a bit better than it was a few months ago at 240 hours of listening. Most of my comprehension is still based on visual cues, but the contribution that actually understanding Mandarin words and expressions provides has increased, very slowly but surely. 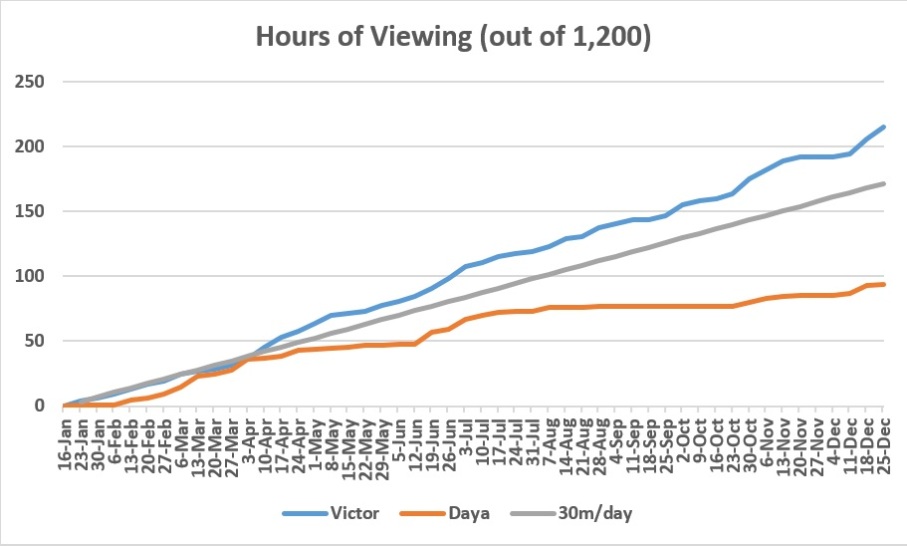